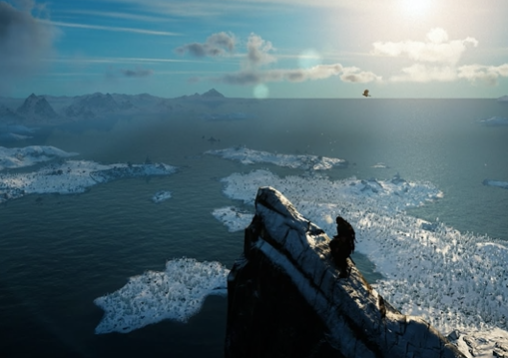 Here’s an actual shot I took of the game after I climbed a mountain in Norway to look out over the world. At the top of this mountain is One of the games many synchronization points, which, Once synchronized allows you to fast travel to that point. Photo by Ethan Glick.

I was sitting in my living room on Nov. 10, anxiously awaiting the release of the newest Assassin’s Creed, and when the clock struck 9 p.m. I loaded into the game. Once it was done loading, I was greeted by one of the most stylish title screens I’ve seen in awhile, and the atmospheric music immediately made me feel like I was sailing the rivers of Norway. I loaded into the game and watched as young Eivor (the protagonist of this game) partied with all the other Vikings. Things didn’t stay joyful for long, though, as we were attacked by another Viking clan. I don’t want to spoil anything for anyone else, but I’ll warn you, some bad things happen, and we escape by the skin of our teeth.

After a brief interlude to pick the gender of my main character, we flashed forward to adult Eivor captured by the same Viking that attacked his village when he was young. We escape (obviously) and go on a rampage, brutally murdering many enemies. It was here that I got a feel for the game’s new dual-wielding system, which lets you dual wield any weapon in the game, including shields.

As I triggered a particularly gruesome finisher, I took a second to marvel at how stunning this game truly was. The way the sun shone through the trees and reflected off the snow was just beautiful. Please note that, as of right now, I do not have my hands on a PS5 just yet, so all of this is written through the lens of a PS4.

“Ubisoft has outdone themselves with the look and style of this game,” Kaya Mosanen, a local gamer, said in an interview with The Wolf.

I then made my way across the terrain to get my Viking brothers back. When I found them, I dealt with a fairly easy boss fight and saved my friends, but not before I had a vision and caught a glimpse of Odin himself.

We then sailed to our clan’s village on a beautiful journey across the water, where I was accompanied by the songs of my Viking friends. To anyone wondering if they should play this game, I definitely recommend it. It’s a beautiful blend of brutal combat and meaningful moments, not to mention the stunning visuals.