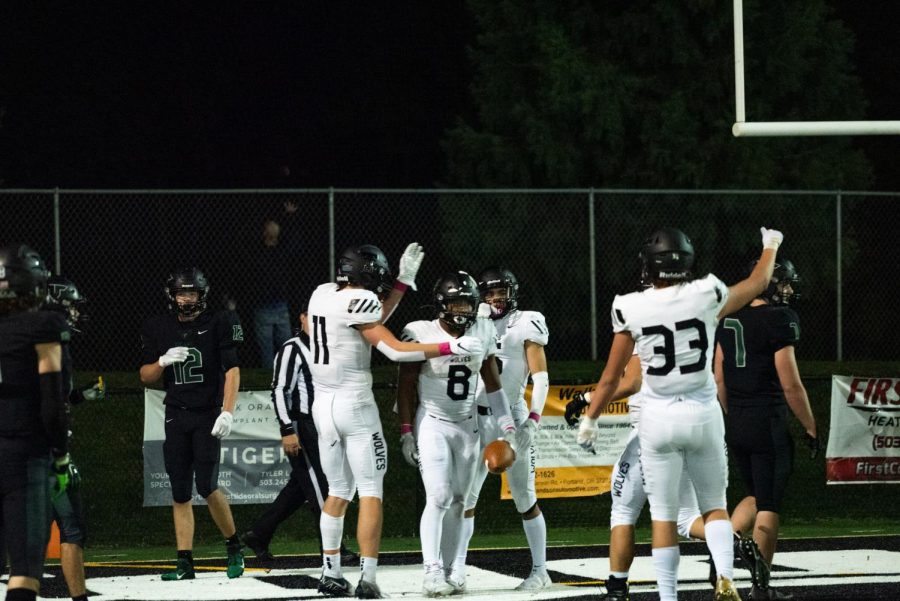 The Tualatin Timberwolves are Three Rivers League(TRL) champions and ranked #3 in the state of Oregon by the OSAA, as of Friday, Oct. 29. West Linn, Tualatin and Lake Oswego have been neck and neck throughout the season. All three teams have an overall 8-1 record, giving Tualatin an equal shot at becoming the #1 team in the state.

“We need to continue to improve and work hard in order to make a deep playoff run,” head coach Dan Lever commented.

The Wolves are packed with talent stemming from their seniors, to whom Coach Lever attributed much of their success thus far in the season.

“I think we have a large senior class that is committed to our success,” Lever said. We have had many guys step up in key spots.”

That they have. In their game against the Oregon City Pioneers, running back Malik Ross had four touchdowns just in the first half. Quarterback Jackson Jones has a cannon for an arm, throwing for 128 yards in the game against Oregon City and completing 8 of his 13 passes. Against the second seed West Linn, Cole Prusia had eight receptions and three touchdowns, as well as seven catches for 132 yards in the first half. With Prusia’s performance and a conjoined team effort, the Wolves beat the Lions for the first time since 2005.

Lever said the team isn’t focused on the pressure of being one of the top teams in the state of Oregon. Instead, “We are focusing on taking things one day at a time.”

Tualatin faced off and won against their rival, Tigard, on Friday, Oct 29, with a final score of 49-13. The Tualatin vs. Tigard rivalry is one for the books, but this year the Wolves needed the win to secure the title of TRL champions.

Once playoffs roll around, Lever says the team goal is to “Keep winning so we can keep playing!”